The day was one of the most perfect of spring days for playing golf, not too hot, very sunny with a light breeze, on a course that was well presented with immaculate greens.    Royal Birkdale must be one of best Golf Courses in the world and a most prestigious venue for the OMGC Spring Meeting and the inaugural Bi-Centenary Gold Medal competition.

Thirty six members and guests played in the competition which was thoroughly enjoyed although the course proved not very forgiving for wayward shots.  Most found the holes particularly demanding if their ball landed in the abundant bunkers or deep rough which proved difficult to get out of without penalty. However, walking in the footsteps of the world’s greatest golfers was an inspirational experience which will remain in our memories for ever.

After changing and partaking in suitable refreshments, members were served dinner in the dining room that overlooked the sun drenched 18th green which provided a spectacular backdrop for this occasion.  The fine dining menu of Beef Bourguignon cooked in Brandy and Red Wine sauce followed by Brioche Bread and Butter Pudding served with Orange Salad and Vanilla Pod Ice Cream was very well received by all the members.  During coffee, the Captain, Phil Goodall gave the traditional Toast of “The Queen and Golf Clubs all over the World”. 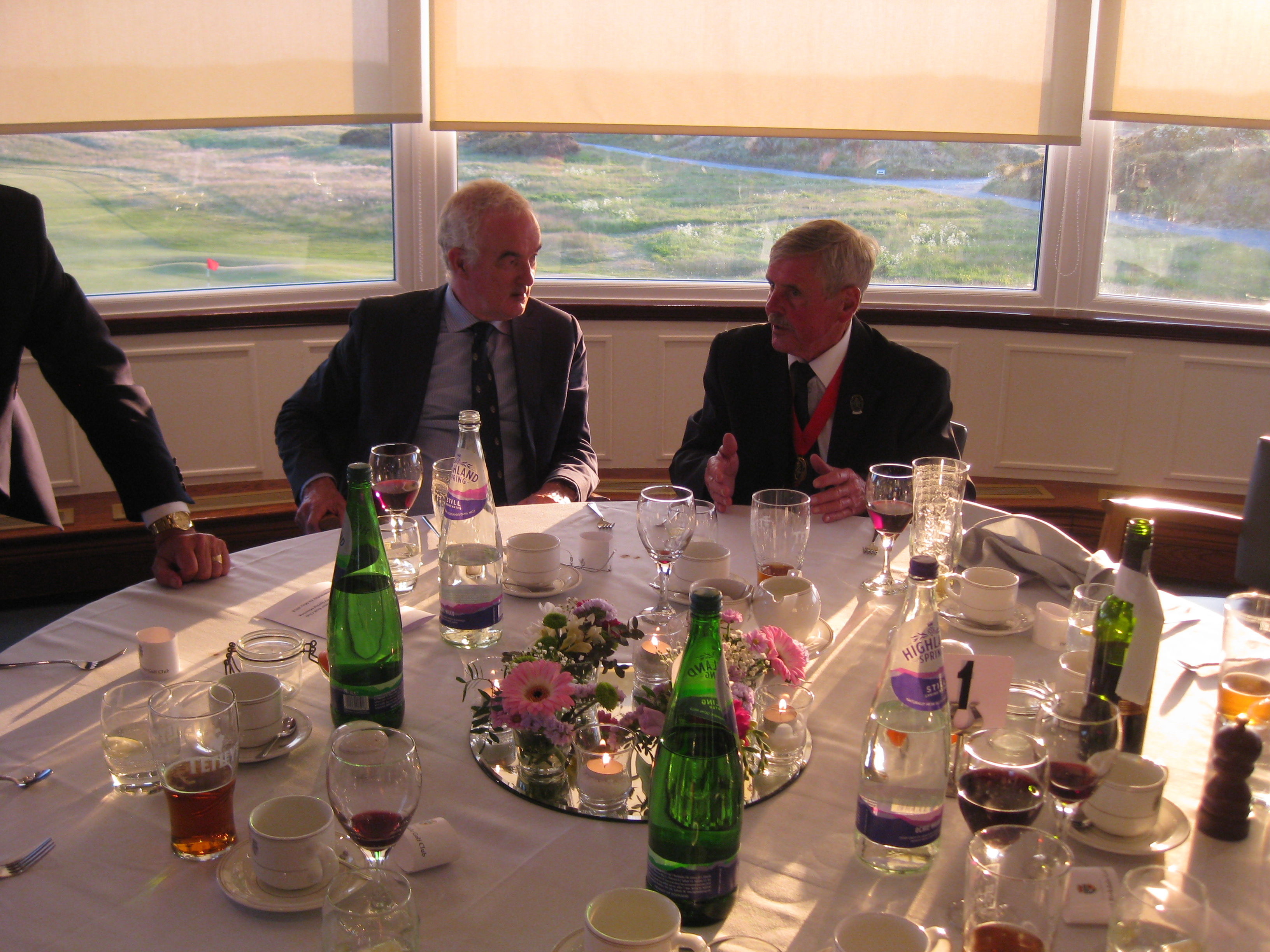 The Secretary, John Mckenna, started the presentation proceedings by inviting theCaptain of Royal Birkdale to say a few wordsThe Captain of the Club, Niall O’Donnell, welcomed everybody to Royal Birkdale and hoped that we all have had a memorable day.  He spoke proudly about the history of Royal Birkdale, The Open Championships played there and relayed a number of antidotes associated with those events.  The Captain was very pleased that Old Manchester had visited to celebrate their Bi-Centenary and trusted that we had enjoyed the hospitality that Royal Birkdale had to offer and invited us to visit again on another occasion.

The OMGC Captain, Phil Goodall, thanked the Royal Birkdale Captain for an excellent day and the hospitality which we thoroughly enjoyed also for his company on the course.   He spoke about the Bi-Centenary event and how this fixture came about from an Irvine Caplan suggestion of four years ago.  This was arranged by Irvine and the late Secretary of Royal Birkdale, Michael Gilyeat, who was one of his contacts in the North West Golf Managers’ Association.  The Captain then presented the Birkdale Captain with a commemorative pack of “OMGC Bicentennial Ale” as a token of our appreciation.

Before announcing the results, the Secretary took the opportunity to thank the Royal Birkdale Secretarial Office and Catering Staff for all their assistance in organising the day.   He then announced the results individually and the winners were presented with their prizes by the OMGC Captain and the Captain of Royal Birkdale which was followed by the winners’ expressions of delight.

Surprisingly, two of the winners have just returned to golf after a prolonged medical absence.

The presentation was concluded with around of drinks on the winners.